The president made three campaign rally-like appearances at airports in Minnesota and Wisconsin in an attempt to counterprogram the first night of the Democratic National Convention.

President Trump speaking at a campaign rally in Oshkosh, Wis., on Monday. He warned that the
2020 election was a “fight for the survival of our nation and civilization itself.”

Standing in front of Air Force One in Wisconsin, a state that delivered 10 critical electoral votes for the president’s 2016 victory over Hillary Clinton, Mr. Trump warned  that the 2020 election was a “fight for the survival of our nation and civilization itself” and condemned Mr. Biden as a puppet of the “radical left” in the Democratic Party.

“You want to crush our economy,” Mr. Trump asked the crowd at the Oshkosh airport, “under the crazy socialist policies of Sleepy Joe Biden and his boss, Kamala Harris — Kamala — and his other boss, Nancy Pelosi — she’s a beauty — and his ruler, Bernie Sanders, Crazy Bernie, or do you want to quickly rebuild the strongest economy in the history of the world?”

Mr. Trump’s re-election campaign has struggled to get traction amid the coronavirus pandemic that has devastated the nation’s economy and forced cancellations and shutdowns across vast swaths of American life. The president’s early dismissals of the threat from the virus, and his administration’s chaotic response, have helped drive some of his poll numbers down to double-digit deficits against Mr. Biden.

Mr. Trump pointedly chose Oshkosh, not far from Milwaukee, in an attempt to counterprogram four days of speeches from Democratic Party stars and some
Republicans who have soured on Mr. Trump.

At a stop earlier on Monday in Mankato, Minn., Mr. Trump delivered an hourlong speech to a small crowd at the airport, accusing Mr. Biden of wanting to raise taxes, weaken police departments, open borders, increase the cost of energy and lock people in their homes because of the pandemic. 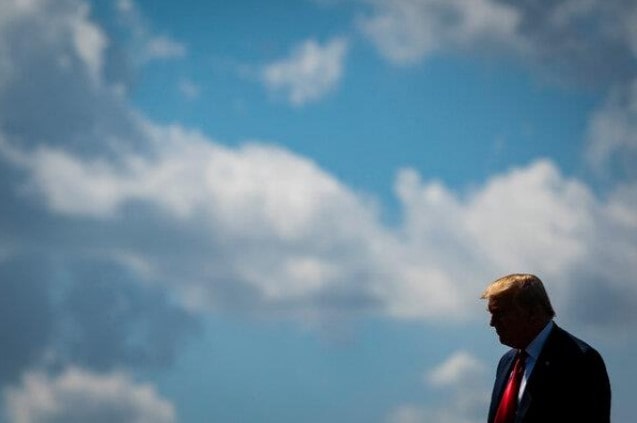 Supporters of the president packed an outdoor section to hear him speak at Wittman Airport in
Oshkosh.

Earlier in his remarks, he boasted about having done an “incredible” job confronting the spread of the virus and falsely said Mr. Biden wanted to “lock all Americans in their basements for months on end, which would inflict permanent irreversible harm on our nation’s children, families health and economy.”

Mr. Trump’s first stop of the day was at the airport in Minneapolis, where there were protests and violence after the death of George Floyd at the hands of a former police officer in the city. Mr. Trump lashed out at Mr. Biden and other Democrats for enabling what he called “radical left anarchists” who looted parts of Minneapolis.

Before Mr. Trump’s arrival in Minnesota, Tim Walz, the state’s Democratic governor, said Mr. Trump had wanted to make his remarks in front of a memorial to Mr. Floyd. Mr. Walz said he had “spent this weekend trying to tell the White House why it was a really bad idea” to use it as a backdrop for Mr. Trump’s campaign.

White House officials said Mr. Walz was mistaken. “Who did you reach out to at the White House?” Judd Deere, a White House spokesman, said in a tweet. “Nobody hereheard from you. @realdonaldtrump would never use the George Floyd Memorial as a  political backdrop, but he does want to hear from business owners impacted by the riots.”

Mr. Trump began his day with an early-morning critique in a Fox News interview suggesting that Mr. Biden’s mental capacity was lacking.

“Biden is shot. I’m telling you he’s shot. There’s something going on,” the president said. “Now with that being said, I don’t underestimate anybody. Only a fool would do that.”

Mr. Trump and his campaign have repeatedly insinuated — without any evidence — that Mr. Biden is mentally slow.

In the same interview, Mr. Trump called Ms. Harris “a disaster” and then misstated her positions by saying that “she wants to take away everyone’s gun. She wants to totally ban fossil fuels.” The president shrugged off a question about whether he is preparing for the upcoming debates against Mr. Biden, saying that he did not prepare much for the debates he participated in during the 2016 presidential campaign.

“Honestly, what I’m doing is I’m doing my job,” he said, adding: “I mean that’s the best debate prep. I’ve sort of been preparing all my life. That’s what I do. I guess I’ll do some preparation, but I didn’t do much last time.”

In Oshkosh, a few blocks from the airport, Kylie Burk, 19, of Fond du Lac, Wis., was selling Trump merchandise in the parking lot of an auto lube shop, including
Confederate flag caps.

Ms. Burk said the Confederate caps were “popular — we supply what people want.” Asked if she thought it was a good idea to associate Mr. Trump with a racist symbol, she said, “I don’t believe the Confederate flag stands for racism, and that’s all I’m going to say about that.”

Ms. Burk said she plans to vote in her first presidential election for Mr. Trump because “I like his ideas and the very good things he’s doing for our country.”

“Before Covid, the unemployment rate was at an all-time low and jobs were at an alltime high,” she added.

At the Winnebago County Democrats’ office in downtown Oshkosh, Kathy Zuehlsdorf said that the phone had been ringing off the hook all day and that people were coming in to pick up Biden lawn signs.

Former President Barack Obama won Winnebago County in 2008 and 2012, but in 2016 the county flipped Republican in a close election as Mr. Trump narrowly won the state. Democratic officials in the county said they were optimistic this year.

“We have gone through hundreds of Biden signs, and we’re ordering 400 more,” Ms. Zuehlsdorf said. 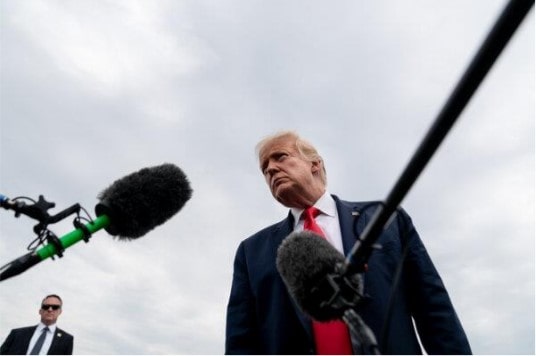 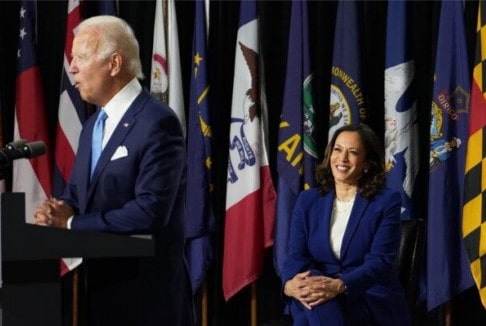 Kay Nolan reported from Oshkosh, Wis.
Michael D. Shear is a White House correspondent. He previously worked at The Washington Post and was a member of their Pulitzer Prize-winning team that coveredthe Virginia Tech shootings in 2007. @shearm

A version of this article appears in print on Aug. 18, 2020 Section A, Page 19 of the New York edition with the headline: Insults and Untruths Flow At Trump Campaign Stops