MILWAUKEE — Vice President Mike Pence on Saturday promised that people with pre-existing conditions “will have access to the coverage and care they need, no exceptions” under the GOP plan to repeal and replace the Affordable Care Act

“Under this administration, Gov. Walker will be able to bring Wisconsin solutions to meet the unique health-care challenges facing the people of Wisconsin,” Pence told those assembled at Direct Supply, a Milwaukee company that provides equipment, furniture and expertise to senior living communities. 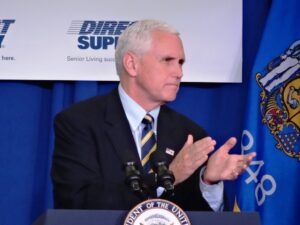 In introducing Pence, Walker said he was proud that Wisconsin had not created an exchange under Obamacare and that his administration had also declined to take a federal Medicaid expansion offered through the Affordable Care Act.

Walker called Obamacare “broken” and said that if not repealed, 28 million Americans will not have insurance by 2026. That figure comes from a Congressional Budget Office report that also found 52 million would be uninsured that year under the GOP plan that cleared the House.

Dems focused on the additional 24 million that would not have insurance under the GOP plan as they slammed Pence’s speech.

“Kicking vulnerable people off of their health care insurance isn’t the Wisconsin way,” said state Dem Chair Martha Laning. “These aren’t just numbers, these are real people and we need to prioritize taking care of our most vulnerable Wisconsinites.”

The crowd applauded loudly when Pence praised Walker as “one of the best governors in the history of the Wisconsin and in the history of this country.” Pence successfully prompted a standing ovation when he praised House Speaker Paul Ryan and Sen. Ron Johnson, both of Wisconsin, for their pledge to repeal Obamacare.

Pence, who also touted Trump’s support of the Keystone and Dakota pipelines the decision to withdraw from the Paris climate accord, told the audience the president “has signed more laws into effect and rolled back more red tape than any president in American history.”

Pence told the crowd Julie Champine spoke of her health care woes during a private roundtable discussion, held in a separate room with Walker, business owners and others. Pence said Champine, who works from home, “literally cannot afford Obamacare” and that her premiums have risen higher than her mortgage.

“Help is on the way,” Pence told Champine, who sat in the audience.

Pence said that “we might need one more thing” to reform health care. He asked attendees to “bow their head and bend their knee.”

“Pray for our country,” he urged.

Pence made no mention during his 22-minute speech of the controversy surrounding alleged Russia interference in U.S. elections or the recent hearing involving fired FBI director James Comey.

But audience member Andrew Cook said afterward that he thought Pence alluded to it when he said, “No matter what the media might be focused on at any given moment, I promise you, President Donald Trump will never stop fighting.”

Cook, of Glendale, is a Direct Supply employee and said he’s open to health care reform but feels Obamacare can be adapted, not repealed.

“There’s good and bad things about it,” he said. “Competition is well and good but they should also have public options like Medicare.”

Shawn Zerr of Milwaukee said said one of his biggest concerns is that health insurance companies are pulling out of Obamacare.

“I have a friend who used the exchange whose premiums have gone up 90 percent last year,” he said. “It’s not a viable option; it’s not working.”

Zerr said he hopes the protection of pre-existing conditions will be retained, however.

Grothman told reporters before the event that constituents aren’t talking about the question of Russia interfering with the U.S. election or last Thursday’s hearings involving fired FBI director James Comey.

“I’ve been so many meetings this week and nobody talked about Comey until all of a sudden, I meet you guys,” Grothman said.

Asked if he predicted tax reform occurring before the end of the year, Grothman responded, “It would be disappointing if it doesn’t happen.”